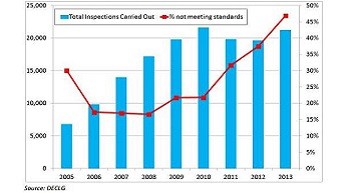 The Housing Policy Statement 2011 provides a commitment to making the private rented sector a stable and attractive housing option for all who wish to rent in the short and long terms.

It is estimated that around 99,000 households receive State support for housing in the private rented sector, or 96,207 (32%) of all PRTB registered tenancies, when leased properties are excluded.  These figures exclude the 103,016 dwellings let by local authorities as well as over 27,000 properties managed by AHBs.

To simplify the current benefits system under Rent Supplement, the Housing (Miscellaneous Provisions) Act 2014 (Commencement of Certain Provisions) Order 2014 (S.I. No. 404/2014) came into operation on 15/09/2014 and provides for a new Housing Assistance Payment (HAP) that will replace the existing supplement scheme.

Eligible households have to find their own accommodation under HAP within the private rented market but unlike previous schemes, the local authority pays the rent directly to the landlord on behalf of the tenant. This is very significant as it means that rent payments to private landlords will be guaranteed.  In order to be included in the HAP scheme, the accommodation concerned must meet the statutory standards for rented accommodation.

Regulations in the private rented sector have been introduced in an attempt to change the behaviour of landlords and/or tenants.

Regulations on standards also act as an incentive for landlords to invest in their property, particularly where it is associated with rent levels.

The percentage of dwellings found to be in breach of regulatory requirements after inspections has been on a steep upward trend since 2010 and reached 47% in 2013.

There is little doubt that a lot has been achieved over the past number of years but even more could be achieved if Local Authorities were appropriately resourced to improve the pace and quality of the inspection process.

Inspex is the technology to deliver on both pace and quality as well as the idea that an Inspection Certificate showing compliance with minimum standards be issued.