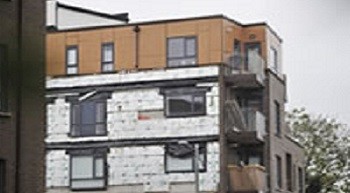 The Priory Hall example is by no means an isolated case of trusting home buyers and tenants being thrown to the mercy of reckless and avaricious developers and inadequate Local Authority planning enforcement. In a letter to Senator John Whelan, angry resident Andrè O'Dubhghaill invites all interested parties to visit the Riverside Estate in Portlaoise. ‘Come and see an NSAI certified; Bord Gais approved; passed by a certified engineer; uninsurable estate’.

O'Dubhghaill says ‘There was raw sewage flowing into the River Barrow, and in March 2012 14 lorry loads of this waste was cleared from the drains as the pump had stopped working, and was piped into the river by the developer.

The render is cracking on the walls and falling off, rain soaks through causing major build up of mould internally, because of this have become uninhabitable, to either rent or live in. The tiles on the steps up to the duplexes are loose and missing and the interior plumbing is a total mess.’

As a direct result of ‘the shoddy construction work’ and subsequent level of claims by the Riverside residents, the Block insurance on all the apartments has been cancelled by the insurer. So far, they have been unable to secure insurance elsewhere.

According to Senator Whelan ‘In the space of a decade, over 600,000 units were built in this country. For example; 96,000 were built in 2006 where 25,000 would have been adequate. This demonstrates the level of inadequate planning and regulation enforcement, and permission given during this period. Units were being thrown up while clearly no one was really following up. Local Authority Managers should have been conducting spot checks on developments.’

Whelan says ‘Local Authorities argue that at the time, they were overrun and understaffed.  Planning is an entity which got off scot-free.  They gave all that permission without having to stand over their decisions.’

‘There’s a Priory Hall in every county in Ireland’ says the Laoise/Offaly senator. People are living in substandard accommodation, negative equity and with high mortgage tied around their necks.  It’s bad enough these days living in a house that you’re happy with. But we’re looking at unfortunate people living in unsafe buildings with flawed electrics, sewage and utilities on top of the ‘usual’ burdens. They have to live in poor quality houses – literally thrown up by rogue builders which were not subject to regulation scrutiny.

Whelan says ‘In one situation in Portlaoise a developer aggressively ordered one young student assisting on the site to get up and plaster while he was taking his lunch break. When the student informed his boss that he was the labourer carrying out such tasks as mixing mortar; nailing slabs and helping with scaffolding, he was reprimanded and told 'If you can stand, you can plaster, just get on with it'.

This begs the question of the standard of building inspections and the urgent need for regulation. In the context of the Government €600 million spend on the highly successful energy efficiency and retrofitting schemes, Senator Whelan says ‘This was a fine project due to the fact that the work was adequately carried out.’

Speaking at a conference in Dublin last year, Prof Malcolm Hollis was reported to have said that the British model of independent inspections, where developments are examined before, during and after construction, protects occupants and ensures the value of new properties.

The professor of building pathology at the University of Reading said ‘It appeared that the lack of legislation requiring mandatory inspections and enforcement in Ireland had resulted in cases where new construction did not achieve the required standards.

He said ‘We have already seen the result of this in relation to fire safety. But the health and well-being of occupants can also be put at risk through failures to achieve required standards for ventilation, water-proofing, drainage, heating and energy conservation.’

The leading British authority on building defect recognition said ‘a key issue in Ireland appeared to be the lack of independent assessment of the design, together with detailed checking of the building work.’